Dentists’ Version of ‘Twas the Night Before Xmas 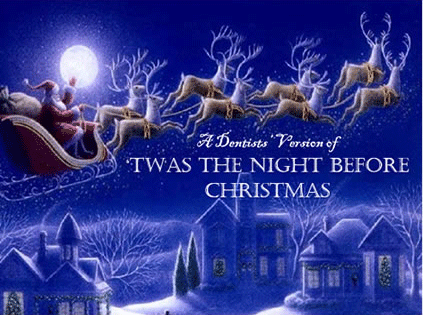 ‘Twas the night before Christmas, when inside his house,
A hot drink he was stirring, his name Dr. Krauss;
All his patients’ teeth cleaned by the office with care,
The hygienists went home too, so no one was there;

The children brushed too, now they’re snug in their beds,
While visions of good dental hygiene danced in their heads;
With all his work done, he took off his cap,
Finally on vacation, he settled down for a nap;

When he lay for a moment, then his teeth turned to chatter,
His family said, Dr. Krauss what’s the matter?
Right out of his bed, he flew in a flash,
Tore straight for the front door, he made a mad dash;

I didn’t wish my patients merry Christmas, oh no,
To his office in mid-day, he sped in the snow;
An impossible task, it would so appear,
To reach five thousand patients, could take a whole year;

So he called in his staff, and asked to come quick,
They’ll work ‘round the clock, to be home ‘fore St. Nick;
More rapid than eagles his office staff came,
And he whistled and shouted, and called them by name;

Now! Sasha, now! Francis, now! Francine and Dixon,
On! Janet, on! Ingrid, on! David and Nixon;
To the top of the list, all our patients to call,
A very Merry Christmas, we must wish one and all;

As they picked up and dialed, wild fingers would fly,
With a prayer for success, mounted to the sky;
When Francis now said, somewhat out of the blue,
No, I will not be doing this, and you shouldn’t too;

What? Said her friends, Dr. Krauss’ll hit the roof,
No holiday wishes to patients, is not a little goof;
Francis lifted her head, gave a smile all around,
We’ll be home before St. Nick, a solution I’ve found;

We will send out one message, a great one, a hoot,
It’ll reach all our patients, every last one to boot;
Let’s go Francis, do it! With a pat on her back,
Cause she’s an idea peddler, she has just the knack;

Her eyes – how they twinkled! Their worry she’d bury,
To the computer she went, with a speed that was scary;
Loaded Patient Communicator, and quickly clicked “Go”,
Found a Season’s Greetings template, with thistles and snow;

As she showed them the message, they gritted their teeth,
Wrote special well-wishes, added even a wreath;
I will send this to all patients, yes even to Kelly,
And as Francis hit send, all their knees turned to Jelly;

“So indifferent,” they grumped, like it’s sent from an elf,
And I’d laugh if I saw one was sent to myself;
A wink of her eye, she just twisted her head,
Soon showed us the Inbox, we had nothing to dread;

She spoke not a word, but showed just how it worked,
Replies fill’d all the Inbox, as if going berserk;
“Thank you!” “How thoughtful!” each one of us knows,
Patient Communicator’s greatness was just exposed;

Dr. Krauss he sprung up, to his team gave a whistle,
And home they all flew, left behind only thistle,
Dr. Krauss would exclaim as he drove out of sight,
Happy Christmas to all, and to all a good night.

For more information on how Patient Communicator can ease the burden on your office staff and help you increase revenues, contact us for a live online demo or to get started on a 30-day free trial, or call 888-512-3452.